Hard Rock Racing is a fast paced and action packed combat car racing game for the iPad 2. In Hard Rock Racing it’s all about arcade racing with awesome physics, homing missiles, proximity mines, insane explosions and awesome hard rock music. The game takes place in a large virtual city and you race within that city.

The game features 40+ tracks separated in circuit races (round tracks with 5 laps) and sprint races (A to B races, no rules, as fast as possible). Beside that there’s a free driving mode where you can explore the city. Hard Rock Racing has a good mixture of tracks where you need your weapons to win the race by shooting and bombing your opponents from the track but also fantastic high speed tracks where it is mostly down to great driving ability needed to win the track. Select yourself whichtracks you like most!

For nearly every action during a race you get in-game cash rewarded. You get cash for crashing other cars, explosions caused by missiles and mines that affect other cars, for jumping over epic ramps and getting airtime cash, for driving best laps and best race times as well as for winning the top spot ranks in a race. Use that in-game cash to unlock tracks and race modes. 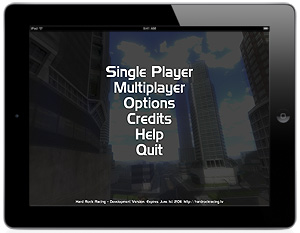 All tracks can be raced in 4 difficulty modes ranging from easy to medium over to hard and finally the insane mode. But don’t worry, if you can’t win a track in a regular race you can just buy the unlocking of the track to continue to the next race. So this failsafe mode allows every player, from beginner to expert, to master all cups and tracks in all difficulty modes.

But Hard Rock Racing does not feature only a great singleplayer experience, the game has also multiplayer built in. Yes, race with you friends (or foes) online or in a WIFI and shoot their asses of with your missiles and bomb them off the track with your proximity mines! The following multiplayer game types are available: Free Driving, Circuit Races and Foxhound.

Please find more details about the game on http://HardRockRacing.tv