Decane released today it’s first application for the Apple iPhone and iPod Touch in Apple’s App Store in iTunes. The application is called “Tea Timer” and is the perfect addition for the die hard tea brewer who wants a single-tap solution to start his countdown timer to get notified until the tea’s brewing time is over.

Tea Timer reminds you immediately with one of the 6 built-in sounds and triggers also the vibra alarm (or the calendar alarm on the iPod Touch). The countdown times can be set in 1 second steps ranging from 1 second up to 59:59 minutes. Compared to the countdown timer integrated in the iPhone or the iPod Touch with Tea Timer it does not take 5 taps on the device to start your but only one tap on the Tea Timer program icon to immediately start the countdown. Also Tea Timer allows you to set also the seconds for each countdown compared to the built-in timer in the iPhone which allows only to set a minutes countdown.

“We’re very excited having deployed our first application into the Apple iTunes App Store.” said Decane owner and founder Martin Schultz and continued “We have even more in the pipeline and can’t await to get our next releases out too!”

Tea Timer is available in the Apple iTunes App Store for US$ 0.99 / 0.79 Euro. Please follow this iTunes link directly to Tea Timer on Apple iTunes or visit our product page for Tea Timer. 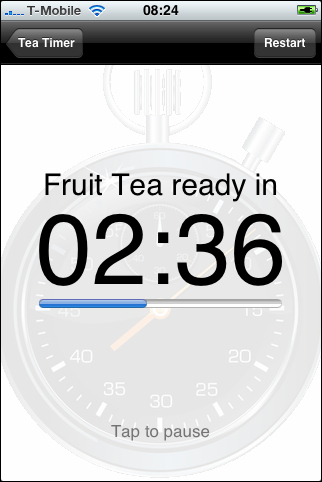